I found myself in a predicament.  I intrinsically love to lift, I love improving my lifts and getting stronger.  I had some basic strength goals I wanted to hit, and at the same time wanted to improve my kettlebell ballistic numbers (problem number one), and on the weekends I would go on mountain or road bike rides with my friends, wanting to keep the same or faster pace as them (problem number two).  You see, I was trying to do three things at once, and hadn’t made any one of them a priority over the other.  (I’m not even going into the aesthetics I was simultaneously trying to keep in check through fat loss)

Eventually, I had to look myself in the mirror, and ask myself which activity was going to be my priority, and then ask whether the other activities were either helping, or hindering my priority.  Oddly enough, an injury answered that question for me.  When I was faced with the possibility of never being able to ride a bike again, versus being able to continue lifting, it was the bike that won.  For me, riding represents freedom and adventure.  It’s something that I’ve done for fun, fitness, and competition, as well as an income through various stints as a shop mechanic or riding instructor.

Looking back through this lens, I recall times when my lifting called for heavy high volume back squats, and how that created thighs that wore 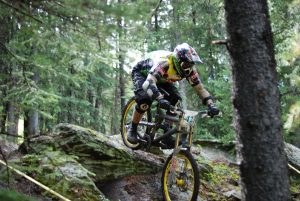 down my seats and barely fit in my riding shorts (let alone left me so sore I could barely pedal), or mass building programs that left me with loads of extra weight to drag up the hills.

However, in a reverse approach, I see how after a long mountain bike season I can return to interval weight and conditioning sessions without skipping a beat, as I personally have yet to find an activity as intense and anaerobic (as well as repeatable) as a multi-hour off-road ride.  Not to mention it is not uncommon to burn thousands of calories on a morning ride.

So, in looking at my lifts, I identified those that were the most affective in assisting my riding: 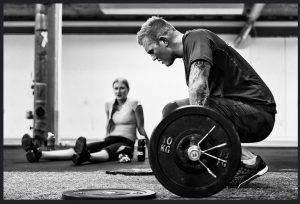 Once I figured out what lifts I was already doing would help me become a better cyclist and mountain bike rider, (and it helped that they were lifts I liked to do – a big component to actually doing the workouts) I was able to formulate workouts that would complement my training, not work against my goals.  It took an ego check, as I realized I don’t need to PR my presses and deads every week, and I needed to put more emphasis on intervals to improve my conditioning.

I also was able to weed out the lifts that work against me, no matter how much I like them.  Through my injury I learned that barbell cleans are not my friend, and I have defective knees and an abnormally long foot to thank for that (basically once I go through the triple extension and rise up on my toes, the leg with the shorter foot has to hyper-extend the knee in order to keep my hips level).  It seems that the more experienced I get in my garage gym, the less equipment I need to use.  It’s a bit ironic.  At first I thought I needed every gadget and fitness gizmo out there, but now I realize it’s mostly fluff.

So, basically, don’t work out for the sake of working out.  Figure out why you are running on this hamster wheel, and then make sure that everything you are doing keeps you aligned with that goal.

And if you like to ride, take some notes from above, and apply then to your own training.  Maybe I’ll see you down the trail!!