The MYTH Of Muscle Cramps – Part 2

In Part 1, I talked about how Dr. MacKinnon and Dr. Bean identified a sport cocktail that calms the ion pathways and can be used to prevent and treat cramps. Here in Part 2 I will talk about some other aspects of cramping that can be helped, while some cannot.

Now on one hand, it has been identified that when it comes to identifying who is succeptable to cramps and who isn’t, genetics may be to blame. Some individuals have nervous systems that are able to monitor fatigue and keep firing as instructed, while others have systems that misfire more than a set of old Christmas lights. Unfortunately, if you are frequently plagued by cramping, you can blame your parents.

We know that we can train the nervous system. We coach that one doesn’t do excessive reps on lifts like the deadlift, barbell clean, and barbell snatch, because they require a lot of the nervous system in that many different motor pathways are asked to fire in different

sequences, simultaneously, and when they fatigue, certain pathways get skipped. When this happens, form breaks down, and people can get hurt.

But, we know that over time, you can begin to ask a little bit more of the nervous system in small increments, and so we design training programs that do this gradually.

I mentioned that I usually tend to cramp at about the two hour mark. What I didn’t mention was that most of my training sessions are about an hour and a half long. So basically, when I get to a point when I am exerting myself about 30% more than normal, sh*t goes haywire in my nervous system. How do I fix this? By gradually increasing the time of my workouts until my body is acclimated to the workload that it is asked to take on, and fatigue is delayed.

“Long slow activity” gets a bad rap these days from the HIIT crowd and others who try to tell you that short, intense workouts are the way to go. Now, don’t get me wrong, Interval training is amazing when it comes to training the heart and lungs to go from rest to maximum output and back to rest in short periods of time, which is extremely indicative of a healthy heart, but Interval training is not the end-all-be-all it’s cracked up to be. 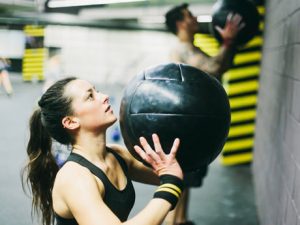 Nothing burns calories like an hour long run or a two hour mtn bike ride or a three hour road ride. If you want to run a marathon in 4 hours without cramping, then you need to be accustomed to going on runs or engaging in other sports activities that last four hours or more. It’s how you train your nervous system to deal with and adapt to fatigue.

I’ll close with a funny (and sad) story about cramping. I was working a crowd supervision shift at my school’s football game one Friday night. I was assigned to the visiting team’s bleachers, right behind the bench. A wide receiver from the visiting team was suffering from hamstring cramps (which is a sign of a poor strength program first of all), and one of the assistant coaches was trying to stretch out the cramp. The athlete’s father, a large, uneducated man, went down to the fence separating the bleachers and the field. He pulled a Ziploc bag from his pocket full of a white substance, and called the assistant coach over to him.
The assistant coach came over, and the father says “My boy there’s crampin’, you give this here rock salt to him!!”

The assistant coach reluctantly took the salt, and went back to continue stretching out the athlete, while the father continued to yell, “Give em’ the rock salt, give em’ the rock salt!” Finally, the assistant coach opened the bag and literally poured what had to be at least an ounce of rock salt in this poor boys mouth! The dad yelled “Suck on it, son!” as I waited for the boy to either spit it out or vomit, surprisingly neither one occurred.

The whole while, all I could think was that the salt wasn’t going to help him one bit, and it must have tasted terrible, but not as bad as pickle juice…