The MYTH Of Muscle Cramps – Part 1 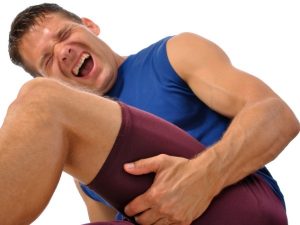 I’m going to touch on one of the most myth-filled topics out there in the sports world, muscle cramps.

Chances are, if you’ve been active for any length of time, you have experienced muscle cramps. They hurt, they impede your performance, and they don’t make a whole lot of sense. What I mean is, you can get them when you’re hydrated, you can get them when you’re dehydrated. Why do they always seem to affect the same muscles, regardless of the activity? Well, there has been quite a bit of recent research on muscle cramps, and the current findings may surprise you.

The subject of muscle cramps came to me today when I was on a mountain bike ride. Right about hour two, I started to cramp in the distal end of my vastus medialis (the inner quad down by my knee) on my left leg. Now that simple occurrence may not garner much surprise, but the thing is, that’s where I ALWAYS cramp up. In severe instances it will occur on the distal end of the vastus medialis of the right leg as well, and in extremely rare occurrences the cramping will spread to the rectus femoris (middle quad). 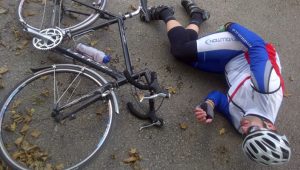 You may be thinking, “Well it’s simple, you must have been dehydrated.”

Not so quick say I. It was not hot (for Southern California), about 75 degrees, so I was not sweating excessively (for me at least, as those who know me would say I sweat more than the average human). I drank plenty of fluids before I left (including orange juice, which contains potassium, and pissed damn near clear right before the ride), and had a 70 oz hydration pack from which I drank regularly. I also don’t abstain from salt in my diet, which rules that out. So right there I pretty much ruled out all the commonly held opinions about muscle cramps, right?

When I cramp, there are a few similarities when they occur (and I’m guessing if you think about yourself you will realize this as well). For me it always happens about two hours into an activity. It always affects the same muscles, almost regardless of the activity (bicycling, swimming, running, weightlifting). I say “almost,” because the activity usually has to be endurance in nature. Which if it’s something I’m doing for two hours or more, is usually the case.

I have experienced cramps in this nature for the past twenty years. And I’ve tried everything out there. From salt pills to bananas, to oranges and supplements. I’ve drank everything from water to sports drinks to electrolyte mixes (I stopped short of pickle juice, however).

I have had friends who I rode with who NEVER cramped, and it didn’t make sense. We were doing the same activities, eating and drinking the same nutrients, and they would never cramp. Well, it turns out that some people simply are not wired to cramp (like my brother-in-law), and to those people I simply say congratulations and I’m jealous. 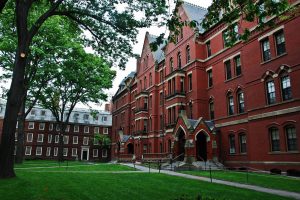 professor at the Rockefeller University, and Dr. Bruce Bean, a neurobiologist at Harvard started looking seriously into the causes of cramping after they themselves still suffered cramps even after meticulously monitoring their nutrition and hydration.

What they discovered may surprise you. The root cause of the cramping wasn’t dehydration, or a problem with the muscles, but it was a nervous system issue. Basically, under fatigue, the motor neurons start mis-firing, causing the muscle cells to seize up. They looked into the ion channels, which is the entire system from the brain, through the neurons, and finally into the muscles themselves. They found that if you could trigger a response in the ion receptors located in the mouth, esophagus and stomach, you could basically tell them to “calm the f*** down” when the pathways began to get out of whack.

They are have developed the first clinically proven formula to treat and prevent muscle cramps, and it is called HOTSHOT. A simple internet search will find it for you. I’m not a brand ambassador for them, and I’m not getting paid to mention them. What they are are two ridiculously smart guys who figured out more about how to prevent muscle cramps than anyone else for the past 5 decades, basically since Gatorade was invented after helping the Florida Gators win their first Orange Bowl in football (American) in 1967.

I actually tried HOTSHOT, simply to see if I could use it to alleviate my cramps. I went on a long mountain bike ride with the intention to fatigue myself to the point of cramping. After two hours of hard riding, I started to cramp. I had made sure that the last gel I consumed was at least 30 minutes prior to when I assumed I would begin to cramp, as to not interfere with the receptors in my mouth. This was an instruction on the box. When the cramps appeared, I downed the small bottle. First of all, it tasted absolutely horrible, but I had an expectation of that after reading some reviews. Second of all, the cramps subsided, and my legs did not feel tight and tired for the remainder of the afternoon, as they usually will after a long ride like that. I will continue to experiment, as I fully know that a causal result with a test subject of 1 does not mean much, but I wanted to share my experience.

Now, even with the root cause being identified as a nervous system misfire, that still doesn’t answer all the questions. It still isn’t as simple as taking another supplement to fix the problem. In Part two of this article I will talk about steps you can take to prevent your own cramps.