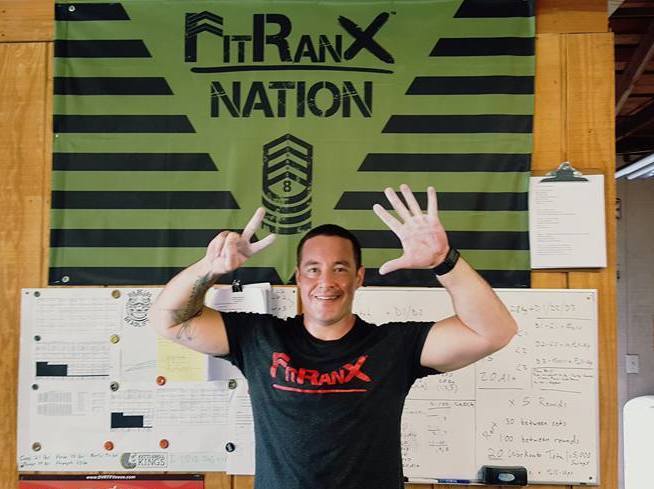 Fifteen long months after I passed Level 6, and after I was awarded my dog tag by Nick onstage at the FitRanX® World Conference, I finally passed Level 7 on my second attempt!!

My first attempt, in June, was thwarted by my inability to correctly count my Snatch reps.  I missed one rep on three of my sets, leaving me at 87 total reps, not 90 as required. It was warm that morning, about 90 degrees, and as I had dropped 5lbs in a week to make weight I was feeling rather weak and queasy during the Tri-Sets.  Even if I had made all the Snatch reps and earned a Pass by the judges, I definitely wouldn’t have felt as if I “owned” the test.

This second attempt couldn’t have been more different.  It was in mid-December, and about 60 degrees in my garage that morning.  I had a 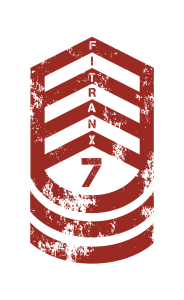 local FitRanX® gym owner, Gino “Shepherd” Garcia come over to run my test, and make sure that I hit all my reps and that all my movements hit the minimum requirements.  I had maintained my weight since June, and had held an average of 195 pounds for the two months leading up to the test, so I could eat whatever I wanted for fuel and not worry about not making weight.  And lastly, Gino and I had been meeting up for a few weeks of Specific Conditioning training to really hone in on those Tri-Sets.

I smoked that test.  I knew I had it as soon as we were finished.  Afterward, I took an 11-minute break and did the Strength Portion of Level 6, just to see how it felt.  I was successful, but finally started to feel a bit queasy, so I stopped to celebrate my accomplishment.

Now, you might be thinking, “Well, he wrote the tests, so of course he should be able to pass them.”  And I’d tell you that I definitely was not as confident in my ability as others were.  Nick reminded me of a time when I told him years ago, that I didn’t think I’d get past Level 5.  At the time, I definitely believed that.  And I stayed at Level 5 for about 3 years, until after both my Dad and my Father-in-Law passed away within 6 months of each other, I decided that enough was enough.  I was determined to lose the 20lbs I’d gained during that emotional train-wreck, and start breaking down the walls I’d built around myself.

Another concurrent goal is to start entering in long-distance cycling events again, both road and mountain, which are things that I used to enjoy, but haven’t done in years.  The benefit here is that they will help train my cardio and endurance that will cross over to the 4.5-hour Level 8 test.   Twenty-five years ago, I did my first Century ride, which is at least 100 miles on a road bike.  It was with my Dad, up in Solvang, CA.  A riding buddy of mine mentioned that he wanted to do the Solvang Century this year, and I realized that I am now the same age my Dad was when he took me up there when I was 14 years old.  So, it has taken on both a functional as well as symbolic meaning.

I’ve written in past articles how cycling teaches its participants about perseverance, punishment, and pain, both physical and mental.  My Dad definitely taught me how to dig deep and grind through things that would cause most people to give up on.  Over the past few months leading up to my Level 7 test, he was definitely in the back of my mind during those Tri-Sets.  I knew that he would never give up, in fact, he took pleasure in causing other people physical pain as they tried to compete with him, or to at least keep up.

In addition to the Solvang Century, I want to hunt down some long-distance Mountain Bike events (50+ miles),

something I’ve never attempted before.  In particular, there is a ride series in Leadville, CO culminating in a 100-mile ride above 10,000 feet in which finishers receive gold or silver belt buckles, depending on time.  I’m not sure I’ll make the date this year calendar-wise, but it’s a goal for this year or next.

As for the specific Level 8 training, I will start combo-ing the Levels together until I feel I can string them all together successfully.  Last week I did Levels 6 & 5 back-to-back, next up will be Levels 4 down to 1.  The toughest part after Level 7 are the Cleans on Level 5.  Those are rough, no doubt about it.  If Nick and I ever revisit future edits of the Level tests, I’ll be looking at those, but at this point, it’s not worth changing (videos, posters, pdf’s, documents, etc).  But otherwise, they build strong forearms, and the more we do them the easier they become.

In regards to scheduling Level 8, I’m looking at next November/December.  I’ve definitely gained some holiday weight, so I’m back up over 200.  I also don’t want to attempt the test when it’s over 90 degrees out here in the Summer.  And lastly, I don’t want it to dominate my focus for the year.  I want it to be something I confidently approach.  As long as I continue my Basic Strength work and keep up my Level test practice, along with my riding, it should come together.

2018 is a big year for me, for other reasons as well, as I hit the big “4-0” in May, and I want to hit it in the best shape of my life.  As an aside, we’re throwing a massive Cinco-de-Mayo party since my birthday is on the 6th, a Sunday.  So, literally, you’re all invited.  Just PM me on FaceBook for specifics if you want to come.  We’re shutting down the street for this one.