Have You Ever Wondered Why Toddlers Can Squat Perfectly? 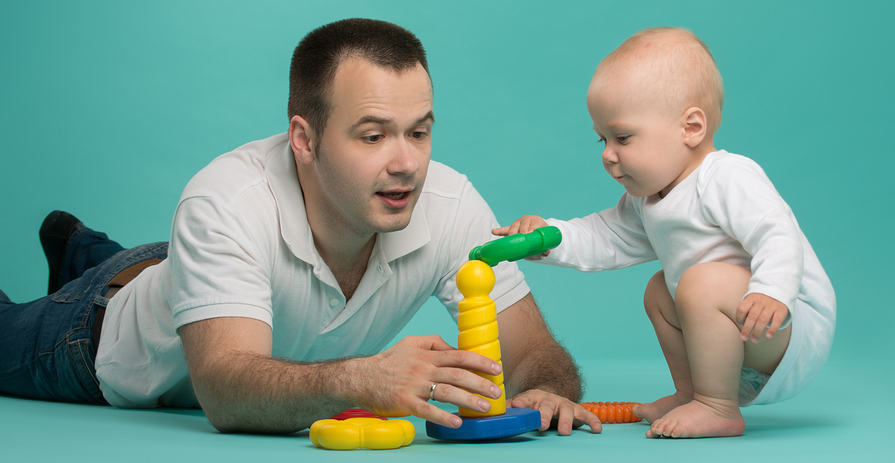 The analogy of the squatting toddler has been used more times than a bro eats bland chicken and broccoli out of a tupperware container, but have you ever stopped to wonder why?

I’m not talking about the mobility aspect of how after we learn to walk, that we then spend the majority of our lives sitting and that causes our hips to tighten up and the only way to unlock them is to do some weird stretch. I’m talking about the toddler’s perfect squatting form. 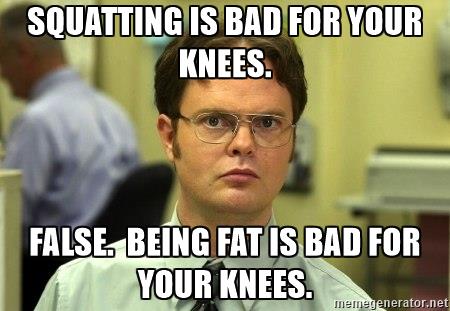 There they are, rolling around on the ground, and they end up in a seated position. They then pull their feet in close to their diaper and BAM they drive right into those little booties and stand straight up, with their arms out in space in front of them. Or the opposite occurs – they are stumbling around, they pause, and then they drop into a perfect ass-to-grass squat until their butt is resting on the floor. Again, without holding onto anything or flailing about. How do they do it???

It’s actually pretty simple, and you are probably scratching the answer right now. It’s their head!! Specifically, their proportionately
giant noggin!! Squatting form is primarily balance, and keeping the center of gravity over the base of support.

Now, if I asked you to stand up off of the floor, without using your hands and without any external resistance, you would have a very difficult time. But if I gave you a weight to hold out in front of you as a counter balance, it would become much easier. 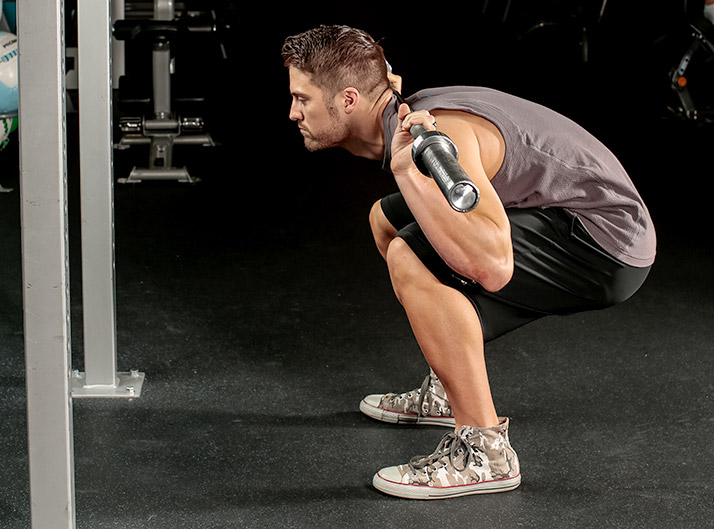 weight. So, when a toddler attempts to stand or sit, they have to balance this massive weight above their shoulders so they don’t fall forward on their face or back on their, well, back. If the toddler keeps the neck straight and the head inside the center of their base (laterally between the feet, and between the heels and balls of the feet) they will be able to stand up and maintain their balance. As an adult, the head represents a much smaller percentage of weight and size, and so it does not help them center their mass as they stand.

Unless someone is extremely flexible and can bring their feet up under their hips while they stand, and they are proportioned with a long torso and short legs, it is next to impossible to stand up out of a squat on both feet simultaneously without assistance.

But from a standing position, I want you to try something. Stand up, and assume a comfortable squatting stance. Drop into a bodyweight squat, raising your hands in front of you, and the only other aspect of form I want you to focus on is to keep your head perfectly balanced above your body. Act as though it weighs thousands of pounds, and you have to keep it perfectly vertical and centered in order to stand. 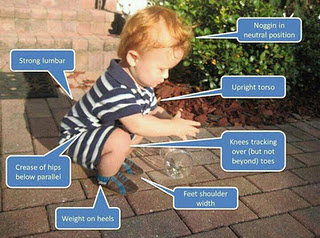 It’s pretty amazing how this little trick can eliminate many of the little form issues that people usually have related to body type. Instead of having to verbally cue someone to move this and shift that, if they focus on balancing the head, the rest of the body parts tend to go where they are supposed to.

So, the next time you are trying to teach or fix someone’s squat, keep in mind this analogy and give the drill a try. You may be very surprised at the result!