4 Tips To Help A Client Master The Basics – Part 2

In Part 1 (You can checkout Part 1 here) we explored ways to improve the Inverted Rows and Bodyweight Squats, here in Part 2 I will talk about how to improve your client’s Push-Ups and Kettlebell Swings.

Push-Ups can be a real challenge, in that with a Pull-Up one can either pull themselves up to the bar or not, while with a push-up one can engage in all manners of physical movements to give themselves the illusion that they are doing push-ups, when in real 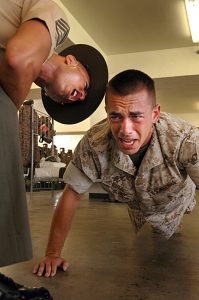 ity they are far from it. (I’ll defer to my students again on this one, both male and female. The only people who have seen more bad push-ups than PE teachers are Drill Instructors!

From a mental perspective, if someone knows their arms are not strong enough to lower themselves to the ground, it can be a bit daunting knowing that at some point of the descending process that they are going to land on their face. So I give them some credit for trying there.

So where to start? Well, you have a few options. The first step is to ensure that they have the ability to hold a solid plank position for 1 minute, both in a “tall” (up on the hands) and “short” (down on the forearms) position. Feet dorsiflexed, quads flexed, glutes flexed, hips tucked under (think shorten the distance between the bellybutton and rib cage), core tight, shoulders packed.

After this, you can work in some assistive exercises to strengthen the triceps. Lying triceps extensions, cable press downs, skullcrushers (youtube it if you aren’t familiar), and even kneeling push-ups will help.

The next step is so simple that most people won’t even use it, because of the industries need to over-complicate things.

You know that machine in the corner that people hang their towels on and young kids like to bench press with because they can pack on the plates? Oh yeah, a Smith Machine! One of the best things a Smith Machine can be used for is training your clients, particularly the larger ones, to do push-ups. It doesn’t matter if the bar starts off at just below chest high and they are standing vertical when the arms are extended, it teaches them to maintain that proper plank and shoulder packed position that they will use to get all the way to the floor. 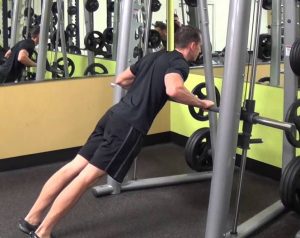 Begin with the bar as high as needed. Start with sets of low reps (3-5 sets of 5-10 reps) in the beginning so they aren’t battling inflammation in their shoulders due to high unexpected volume, and build up to sets of 10-20. When they can hit all the reps in all their sets, lower the bar
to the next hook and start over. I had a large client (420+ lbs) who did this, and not only was he able to do regular push-ups eventually (we actually kept him on the bottom hook so he could get full range of motion without his belly hitting the ground), but the first time he bench pressed he benched 315 for 5 reps, and was able to overhead press a 48kg Kb for 1 rep on each side. Just because they are big doesn’t mean they are weak, it takes a lot of strength to move around that much mass!! 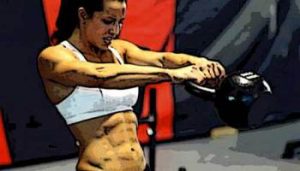 And now the elephant in the room, the Kettlebell Swing. I will preface everything here by saying that if you yourself do not know how to execute a proper swing, find someone who does and pay them to teach you. There are multiple organizations who are certifying thousands of people a year on this movement, namely the RKC, Strong First, and Strength Matters. Find anyone who has been through one of those certs and they will know their stuff.

That being said, there are a few tricks that can make immediate improvements on someone’s swing.

But first, before your client even picks up a kettlebell, the best associative lift with proprioceptive crossover is the Romanian Deadlift. It is a slowed down version of the hip hinge, and allows the client to feel the muscle groups that should be flexing and stretching. For a client that has spent their lifting history moving in slow, controlled movements, the RDL is an excellent “gateway” movement to the world of ballistic hip hinges. It also teaches the lat engagement needed to hike the bell through the legs.

Once the client moves on to an actual kettlebell, it is crucial to keep the kettlebell high in the hike position, and not allow the 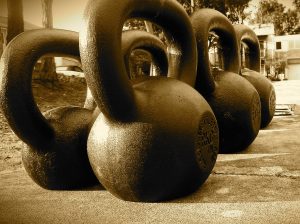 handle to travel below an imaginary line between the knees. One way to do this is to shorten the arc on which the kettlebell travels by keeping the shoulders packed and lats engaged throughout the entire movement. This keeps the ‘bell closer to the body, and it enters the hike high in the crotch, rather than pulling the upper body away and down from the center of gravity, resulting in what is called “scooping” (think a backhoe digging a hole with arm extending away and down).

After driving their power through the feet by engaging their hamstrings and glutes, and keeping the core tight to maintain a neutral spine, they want to finish in a tall position, imagining that if there were a string attached to the top of the head pulling them vertical and standing tall. If they mentally focus on a strong explosion in the hips, and the imagery of being “pulled” into a vertical position, then they will think less about lifting the kettlebell up in front of them, and just allow momentum to do the job for them.

Again, for an individual with no history of explosive lifts (Olympic, Kettlebell, or otherwise), moving a weighted implement quickly can be a scary proposition. 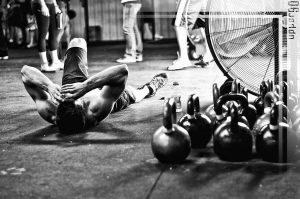 These three tips can make an individual’s experience a positive one, meaning they will return, rather than disappear.

So whether you are initiating a new client to the world of strength training, or training them specifically for the FitRanX® Level 1 test, everyone needs to be able to push, pull, squat, and hinge. Hopefully these four tips make your job a little easier, and add some tools to your toolbox!